I love writing dialogue. To me, it’s so much easier than plotting and worrying about grammar, because I’m almost functioning as a court reporter–I’m simply typing out what the people in my head are saying. I sit back and let them take control.

How do you step outside of yourself like that, though? How do you avoid making your characters into you?

I make no secret of the fact that I dislike absolutist writing advice and am inclined to give it the finger and move on, so I’m not offering any–I’m only telling you what works for me. That’s the kind of writing “advice” I’m inclined to pay attention to, because I’m not being told what to do–I’m being offered food for thought, not a rigid set of rules carved in stone. I prefer suggestions to demands, and here’s my suggestion:

That’s it. Listen to people talk. I can’t help but overhear fascinating little snippets of conversation all day long as people walk past me. Sometimes they also approach me and talk my ear off, and I listen to everything they say and file it away somewhere in my head, because that’s part of a character. That’s something to use.

The way people talk when engaging in the most mundane, functional, everyday conversation is key. Real dialogue has no rules. People aren’t grammatically correct–they speak in broken sentences and grunts. They pause a lot out of uncertainty and social awkwardness and put emphasis on certain words. They trail off, distracted by stuff on their phones. Stop thinking of dialogue from a perfectionist writer’s point of view. Write dialogue that makes that part of you cringe. Don’t write what you think people should be saying–write what they are saying.

I’ve spent an enormous amount of time conversing with women, and I pick up on little nuances that I put into female characters and dialogue. I don’t assume I know what’s going on in their heads based on what I think they’d be thinking. I have to listen. i draw all kinds of info out of people because I’m good at listening.

Just last night a woman in her late fifties or so stopped me at random and chatted me up about all kinds of things and commented that she didn’t usually do that but I looked like someone who wanted to listen. And no, that incident didn’t prompt this post, because it was already partially written in my drafts. It touched me, listening to her. She’s a rich widower and according to her, an ex-motivational speaker. So I’m listening and empathizing with what she’s saying, but at the same time I’m thinking, What if she wants to be some kind of sugar momma? Drive me around and buy me nice clothes and pay off my debt… Would my wife go for that? I bet she would. Could I do it with this lady? Got a nice body. Nice hips. Yeah, I think I could see myself grabbing ahold of those.

Elements of her are definitely going to go into some character at some point. Life is full of characters. Some you like, others you don’t. I don’t want all likable characters–that’s boring to me.

I dislike damn near everyone in my book The Act of Laughing. I don’t want to be like anyone in that book. The two characters I do like aren’t anything like me. One’s a pregnant teenager and the other is a flawed but pure-hearted detective trying to uncover truths buried by systemic corruption.

The dialogue in that book is fire, though. I don’t say that lightly, because I’m not a prideful person, but after recently re-reading and re-editing it almost ten years later, I really impressed myself, and I attribute that to a lifetime of listening.

I have hyperawareness OCD, a condition characterized by… eh, here’s a screenshot: 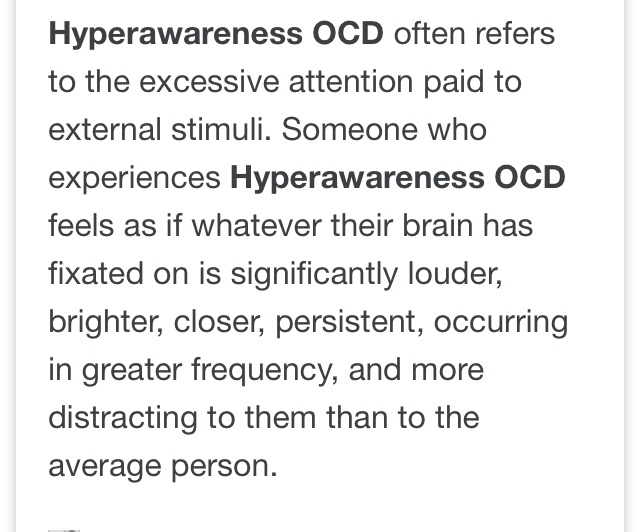 I see and hear everything. It’s very hard for me not to. It’s a borderline debilitating condition, and I’ve fought against it and pressed onward as best I could my entire life. The other day while driving to work I read a plastic grocery bag as it tumbled across the highway. I read all license plates and make acronyms out of them in my head if they aren’t already there. It’s downright wacky. I analyze song lyrics in background music at restaurants while having conversations with people. It’s very hard to focus on anything, because so much mental energy is expended involuntarily processing all of this minutia.

What if I’m not supposed to fight it, though? Unfortunately, despite making me miserable, it also drives my creativity. I haven’t taken meds in years, and it’s been a wild ride, but I’m getting to know my tormentor and discovering what he can do for me.

His name is Shane Wolf, and he’s the Slim Shady to my Eminem. Why is his name Shane Wolf? Because reasons. That’s all I feel like divulging at this time.

Anyhoo, none of that makes me special, and I don’t want to come across as some kind of boo hoo crybaby about it. I divulge this info not to vent, but to provide context. OCD makes dialogue much easier for me, because I’ve got all these conversations stored in my head. I just remix them.

So that’s how I write dialogue. Your approach might be different, and that’s awesome. There is no one best way to do anything when it comes to writing, making films or creating music. It’s art, and art is a fluid, abstract concept that can mean almost anything.

Never apologize for venting to me, because you might just be doing me a favor. Go ahead, I’m listening…