By the time I turned five, I was already exhibiting the textbook symptoms of original formula OCD Classic: excessive handwashing, fear of contamination, counting, checking, etc.

My behavior wasn’t recognized as OCD at the time because it wasn’t really something that existed in the consciousness of the general public until many years later.

None of the counselors or psychologists I was taken to seemed to recognize it, either, although I probably didn’t think to mention any of my symptoms, as I had no idea that those things weren’t normal. An elementary school psychologist did come close to figuring it out, even using the word “compulsive” in this 1988 analysis, despite my attempts to throw off the test by using my left hand to draw pictures with. 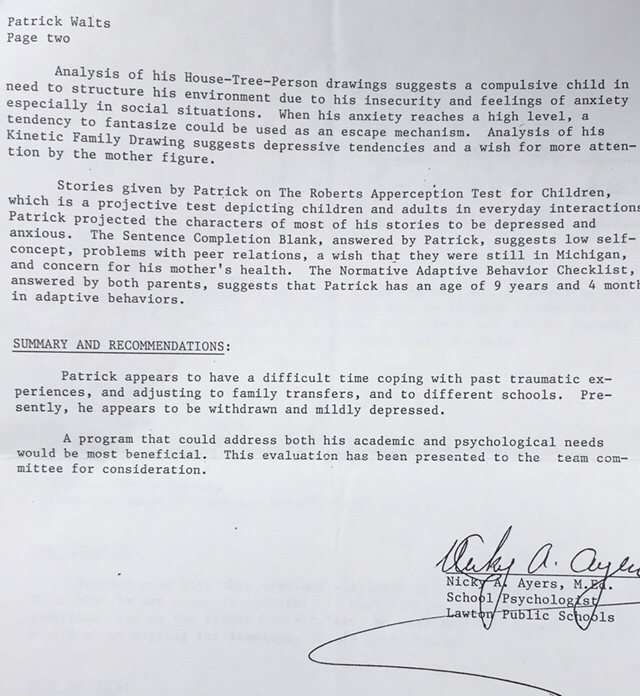 I was eighteen when I was finally able to give a name to my affliction, and over time I was able to train myself to resist my irrational compulsions. The things I was afraid of weren’t real, after all. Nobody was going to die if I didn’t take exactly six bites from a candy bar. Nothing bad was going to happen if my left hand brushed a doorframe as I entered a room. I mean, that’s stupid, and I recognized that and stopped doing those kinds of things.

Like a game of whack-a-mole, though, when I brought down the mallet on one symptom, another would pop up out of another hole, and another, and another. Twenty-something years later, I’m still playing.

My obsessive thoughts are more reality-based now; I dwell on bad things that realistically could happen.

I suffer from constant anxiety that rarely relents and lets me have a “good day.” I don’t know what a good day is, honestly. I can’t fully enjoy anything because my brain is chained to some bizarre obsession at any given time.

For example, I saw Iron Maiden last year. Lifelong dream fulfilled, big ol’ check mark on my bucket list. And it was amazing, but all I could think about was what might be going wrong with something that I’m not even going to address here, because I also have this thing where I feel like just saying I’m afraid of something happening is going to make that thing happen.

Suffice it to say, I’m always distracted. I’m always worried. I’m always afraid. I may have a good hour or two of pure relaxation once in awhile, becoming immersed in the moment, but my brain always ruins it.

I wanted to have a relaxing weekend last weekend. I was exhausted from hard work, lack of sleep and chronic digestive issues. Something went terribly wrong and the ensuing anxiety gnawed at my insides until the problem was resolved.

Back to work, another strenuous week of looking forward to another relaxing weekend; this one. Now, something else has gone wrong. I don’t ever have enough money to pay for things like this, so I’m left terrified, worst-case scenarios swirling about in my head like a tornado trapped in a box.

I don’t know what I’d call my current condition. Oh, sure, the basic framework of OCD is still there, but more than one person who is knowledgeable in the field of mental health has told me that it appears I have generalized anxiety disorder.

I’m sure it’s normal for the lines between mental disorders to become blurred. I’m fairly certain I’ve got a little ADD and bipolar going on as well, but that’s not been diagnosed. Honestly, I’m not sure if I care about putting a name on what I have. I think I’ll just continue to call it OCD and press onward, as I’ve done for decades.